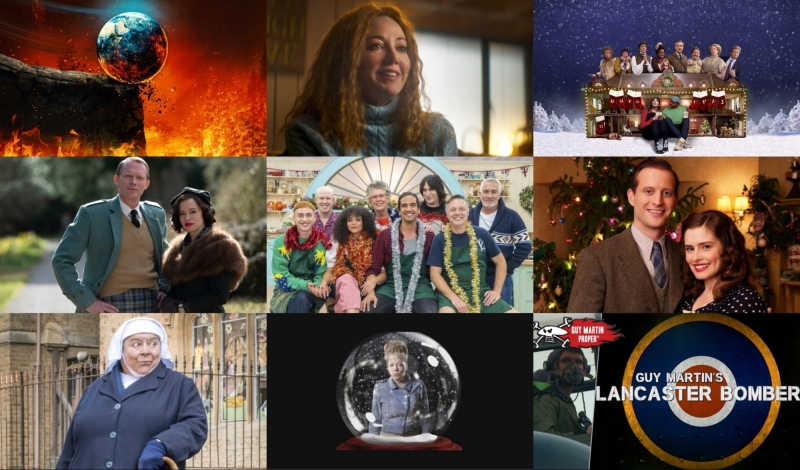 Here are some Christmas TV highlights from our United Voices clients!

Guy honours the Lancaster bomber crews of World War II, as he tries out several onboard roles including pilot, gunner and bomber aimer. Has he got what it takes to join Bomber Command?

Narrated by Shaun Dooley.  This will be shown on Sunday 19th December at 9pm on Channel 4.

WE WISH YOU A MANDY CHRISTMAS

Diane Morgan returns as Mandy in a new Christmas special which she has also written and directed.

What is the true essence of Christmas? Is it the glimmer in a schoolboy’s expectant eye as he opens his pillowcase on Christmas morning and tucks into a delicious walnut and a bruised tangerine? Is it the wide smile on a publican’s face as he welcomes merry revellers with a vat of warm mulled wine he’s made in a sort of electric keg he normally puts oxtail soup in? Is it the haunting harmony of a choir respecting the current Covid protocols? Or, is it a Christmas episode of a TV show that is slightly longer than usual to make it appear 'special'?

Available on Monday 20th December at 10pm on BBC Two

CHRISTMAS AT THE TOWER OF LONDON

Historic Royal Palaces interpretation officer Emma Bell has a bold plan to transform the fortress into a spectacular winter wonderland, inspired by the Tower's famous menagerie. Chief curator Tracy Borman uncovers how a grumpy Henry VIII rejected his wife Catherine of Aragon's Christmas gifts, Beefeater Darren Hardy takes the Yeoman Warders carol-singing around their homes in the Casemates cottages, and the Tower community comes together for a special service in the Chapel Royal, a Christmas wedding!

Narrated by Jason Watkins, on Channel 5 at 8pm on Wednesday 22nd December.

Fred and the team return once again for another festive edition of First Dates - and after last year’s Christmas was cut short for so many of us, they are going all out to give this new crop of festive singletons a Christmas to remember. Now more than ever, First Dates at Christmas is about bringing people together in the name of love. At the heart of First Dates has always been people’s stories, and this merry edition is no exception - even more so after the year we have all had.

Narrated by Brian Protheroe, on Channel 4 at 9pm on Wednesday 22nd December.

It’s Christmas at Button House, and Mike is determined to make it perfect for his family. Alison is also determined to deliver the best Christmas ever for the living and the dead, although the latter aren’t filled with festive cheer. Christmas just isn’t that much fun when you’re deceased. But when Julian is confronted with past wrongs, he has a revelation that could help the ghosts rediscover the real message of Christmas.

Jennifer Saunders guests stars in this years special which also features the regular cast member Jim Howick, who writes and stars as Pat.

ROYAL CAROLS: TOGETHER AT CHRISTMAS

The Duchess of Cambridge hosts a carol service at Westminster Abbey to celebrate the work of people and organisations who have supported their communitites throughout the pandemic.

Narrated by James McAvoy. On ITV at 7.30pm on ITV.

8 OUT OF 10 CATS DOES COUNTDOWN CHRISTMAS SPECIAL

Jimmy Carr hosts a special Christmas edition of 8 Out of 10 Cats Does Countdown, packed with festive surprises. He is joined by our Nick Mohammed and Countdown regular Susie Dent.

On Channel 5 at 9pm on Christmas Eve.

It’s December 1966, and good tidings are in the air. Following a long engagement, Lucille and Cyril are excited about their upcoming nuptials and can’t wait to get married on Boxing Day. However, as the day approaches, nothing seems to run smoothly, and the wedding ceremony itself is put in jeopardy.  While Nancy focuses on her final midwifery examinations, it is all hands on deck as the Nonnatus team prepare for what will inevitably be a busy Christmas. The maternity home is filled with expectant mums-to-be, each with their own challenging case.

Miriam Margolyes returns as Mother Mildred.  On BBC One at 8pm on Christmas Day.

THE GREAT CHRISTMAS BAKE OFF

The cast of Channel 4’s award-winning hit show It’s A Sin will be reuniting this Christmas for a seasonal special of The Great British Bake Off. Swapping the Pink Palace for an equally iconic erection, Shaun Dooley will enter the Bake Off tent to try his hand at some festive themed bakes. Judges Prue Leith and Paul Hollywood and hosts Noel Fielding and Matt Lucas will preside over the hotly contested competition to see who on the cast knows their sieves from their spatulas in the first of two festive episodes airing on Channel 4 over the holiday period.

On Channel 4 at 8pm on Christmas Day

AROUND THE WORLD IN 80 DAYS

Adapted from Jules Verne’s well-known book of the same name, this eight-part series follows the legendary adventurer Phileas Fogg, who is attempting to travel around the world in 80 days in a bid to win a lucrative wager he entered into.

Fogg, whose ingenuity and clever contraptions will be tested over the titular time-frame, could do with friends on such a long voyage – and luckily he has them in the form of sidekick Passepartout and Abigail Fix, a journalist who accompanies the men in order to chronicle the adventure.

In a similar vein to 2018’s hugley successful A Very English Scandal, a dramatisation of the 1976–1979 Jeremy Thorpe scandal, this new 3 part drama drama will focus on the antics surrounding the divorce of the Duke and Duchess of Argyll in the 1960s.

This darkly comedic retrospective mixes real news footage and scripted talking-head interviews as it sends up the year that tried to one-up 2020.

Starring Diane Morgan & Nick Mohammed, it is available from 27th December on Netflix.