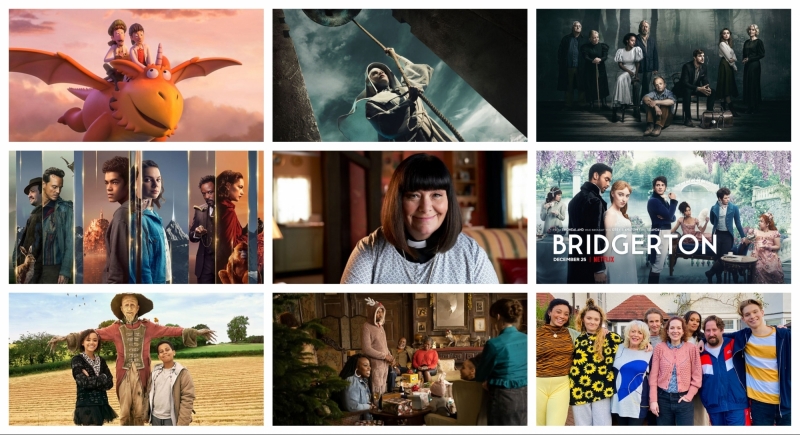 This year’s been a strange one, but there’s still plenty of festive TV and film, starring a whole host of United Voices clients!

THE SAVOY AT CHRISTMAS narrated by Celia Imrie

Filled with glamour, elegance, history and character and truly the first luxury hotel in Britain, The Savoy has sat alongside the River Thames for over 130 years. It has hosted rock stars and royalty, Oscar winners and prime ministers and is now opening its famous revolving doors to the cameras for this brand new Christmas Special.

The festive season is the busiest time of year. Across the hotel, every department is preparing for the rush and the hotel is fully booked.

As all paths converge on Cittàgazze, Lee is determined to fulfil his quest, whatever the cost. Mrs Coulter’s question is answered, and Will takes on his father’s mantle.

WHO WANTS TO BE A MILLIONAIRE: THE MILLION POUND QUESTION narrated by Stephen Mangan

A look back at the 2006 win of Ingram Wilcox as he relives his most memorable moments from the game that changed his life.

THE VICAR OF DIBLEY IN LOCKDOWN starring Dawn French

As Christmas approaches, the vicarage is looking suitably bedecked. The vicar contemplates what has been a very strange year. She remembers how the good folk of Dibley have been equally challenged in earlier times by wild animals and by a series of witch trials, but this has been an especially bad year. The Dibley nativity play has had to be cancelled, but Geraldine has nevertheless written a special nativity poem which she now reads to us all.

It’s Christmas Eve and the day before Helen and Hugh’s much anticipated wedding. James is trying to bury his pain over Helen and has invited his new girlfriend Connie to the annual Skeldale Christmas party. Preparations are well under way, Tristan has decked the halls with mistletoe and Mrs Hall has laid on a feast and is looking forward to her son Edward returning for Christmas. Siegfried is delighted when Dorothy turns up and wonders if now is the time to throw caution to the wind.

Jennifer Saunders slips behind the wheel of a classic red Jaguar E-Type for this special show for ITV.

Joined in the passenger seat by guest Hollywood actor Michael Sheen, Jennifer drives him on an emotional journey through his own past. With cameras inside the car, every intimate moment is captured as Michael and Jennifer visit places and people that have helped shape the global star he is today.

First Dates at Christmas will feature Fred Sirieix and his team swapping London for the beating heart of the British countryside for festive fun and romance this year. In festive First Dates spirit, the guests will wine, dine and get merry as Fred and company end the night with a Christmas toast.

Wednesday 23rd December at 8.30pm on BBC One

Mike is determined to host the perfect Christmas for his family, and Julian has a revelation that could help the ghosts rediscover the real message of Christmas.

Susan and John visit a scrapyard, where they meet Worzel's old friend Saucy Nancy. She is a carved ship’s figurehead, and she wants their help to get back to the sea.

The worlds of theatre, film, comedy and music collide as Comic Relief presents a brand new ‘stay at home’ adaptation of the pantomime Cinderella!

The timeless classic, rewritten by the award-winning Dawson Brothers and produced by Richard Curtis, sees a host of A-list stars take on some of the most iconic roles in panto.

A heart-warming Sky original inspired by the true story of when a six-year-old Roald Dahl meets his idol Beatrix Potter.

Whenever you see a reindeer at a festival event, it’s likely come not from Lapland but the Cairngorm mountains in Scotland. This documentary takes us to the stunning Scottish Highlands to a community of dedicated herders who live alongside their antlered wards, and follows a group of young reindeer preparing for their first ever Christmas in a year like no other. Even in the shadow of Covid-19 and the worry that some of the biggest events in the festive calendar will be cancelled, the Cairngorms team go to great lengths to ensure the unique process of nurturing and training the herd isn’t disturbed.

Wealth, lust, and betrayal set in the backdrop of Regency era England, seen through the eyes of the powerful Bridgerton family.

Zog and Gadabout try to rescue Princess Pearl, who has been locked up in her father's castle. Based on the book by Julia Donaldson and Axel Scheffler.

The circus comes to Poplar, putting a magical spell on its residents. A delighted Shelagh is reacquainted with an old friend, and Trixie receives an unusual gift.

Sunday 27th December at 9pm on BBC One

Sister Clodagh and the sisters of St Faith start a school at the mysterious palace of Mopu, helped by Mr Dean. But is the palace haunted?

A Christmas holiday break at Colin and Cathy’s luxury lodge in the Scottish Highlands threatens to derail the neighbours’ friendship when Cathy pushes Beth too far.

The world of celebrity has been transformed since the turn of the century, driven by some of the most dramatic technological and cultural developments in recent times. From the fame farms churning out reality TV stars to the rise of the celebrity politician, our complicated obsession with fame now impacts every aspect of our lives - from the things we read and watch to what we buy, and even who we vote for.

Today, celebrity is currency, but fame can also come at a cost. We hear from the people pulling the strings and the celebrities themselves as they lift the lid on the inner workings of the fame game.

Wednesday 30th December at 9.45pm on BBC One

2020 has been an absolute nightmare for the Jessop family. To boost family morale, they decide they are going to have a summer holiday after all, even if it is in Margate in October.